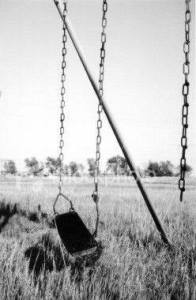 Little Billy walked home from school that day, same as every day, past the old playground next to the abandoned church. Not sure why it was even still around…there were weeds everywhere and all the equipment was falling apart. Only one swing on the swingset was still intact. As he passed by he could hear the chains squeaking when the wind blew upon it. He wasn’t sure why but it creeped him out a lot. He wished he didn’t have to go anywhere near it but it was the quickest way home.
He had left school later than usual because Tommy was waiting for him outside the doors. Tommy was the school bully and he knew if he’d left when he was supposed to right after school he’d have been in really bad shape by the time he got home. It had happened before and he didn’t want to deal with that again so he waited, watching out the window till it got darker and he saw that Tommy had left. Walking past the playground now that night it was even scarier. The setting sun cast shadows on the ground and the swing creaked loudly in the early evening breeze. He suddenly had the strange feeling he was being watched…he then thought he saw something out of the corner of his eye but he was afraid to look back, then he heard a noise and turned around fast.
There was a doll sitting on the swing, one of those old baby-doll ones with a sort-of clowns face drawn on it. It hadn’t been there a second ago. He wanted to scream but couldn’t…he just closed his eyes & turned around. But when he dared himself to look back it was gone, only the swing was swaying and creaking. He heard an evil laugh coming from the old church then turned and ran all the way home.
He was in a panic by the time he reached his house, breathing hard and panting. No one was home yet but his older brother…he thought about telling him about it but he knew he’d just laugh at him & call him a cry-baby. As older brothers go he was pretty typical so he tried to put it out of his head. He was ok through dinner, doing his homework & everything else until he tried to go to bed later. Once all the lights were off and it was quiet, he could still hear the squeaky swing. Then he heard it again, that evil cackle right outside his window. He was terrified, afraid to move but forced himself out of bed and slowly peeking out the window he saw the doll in his yard. He stood there, petrified, as he saw its head move and it looked up at him, grinning wildly as he noticed movement behind it…and that’s when Billy realized the doll had brought friends.

THE QUEEN OF HELL 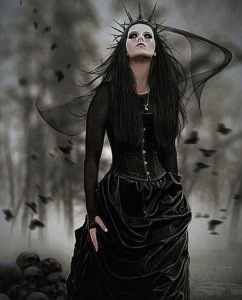 One response to “Billy’s New Friends”